Interview with Tana Pigeon, the woman behind Mythic GME!

People, it is with great joy and happiness that today I present, in English Language, a talk wih Tana Pigeon, the woman behind Mythic GME, and many more cool RPGs, supplements and materials.

We talked a bit about the history of MYTHIC GME, the ideias behind the supplements Variations I and II, and about solo RPG in general!

For me it was like a dream to have this conversation. Mythic is a game that changed my life in many different levels! 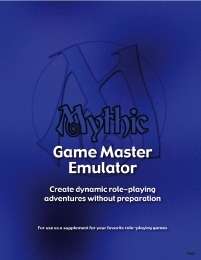 Hi, Tana Pigeon. Here is Tarcisio Lucas, who contacted you on Google Plus, about the interview for my blog in Brazil.
First of all, I would like to register that I am extremely fond of your work, and I can certainly say that Mythic has changed my life! I've always wanted to play RPG, but I've never been able to form a consistent group ... with Mythic, I was able to fully realize that dream!

1-Last year you released a new supplement for Mythic, "Variations II", presenting new ideas and methods to deepen the Mythic experience. It was amazing, I loved it.  How did the ideas in this release come to life?

Tana: I’m glad you liked Variations 2. Mythic had been out for a long time without any major revisions to it, or a second edition. While the core mechanic of Mythic, the yes/no questions approach, can be used to resolve any detail, I always wanted Mythic to incorporate more natural language questions. Instead of trying to come up with a single way to handle every question, I thought it was best to come up with a number of different ways to ask and answer different types of questions. So, that’s where Variations 2 comes in. I wanted Mythic to be able to answer any question, not just yes/no.

2 - You are recognized as the creator of the most emblematic RPG when it comes to RPG solo ... but I would like to know if you have any preference as a player: playing solo, cooperative, or in traditional groups (with the Master / players division)?

Tana: I love to play solo. Big surprise, right? lol Honestly, I would like to play in a traditional group as well, but I just don’t have the time for it. A lot of people are in the same boat. I think even if I did have access to a group, I’d still mostly be playing solo because I love it. When I run a solo game, I often write it out, like a novel. I see my solo games as being part of an unfolding story.

3- Much that has been developed related to solo RPG in recent years draws heavily from what was presented at Mythic. Have you been following any of these new games? Has anyone caught your attention in a special way?

Tana: I’m always interested in hearing about them, because I find it fascinating the different directions people find to take solo play in. I also enjoy discussions about solo play, because there are so many good ideas out there. But it’s rare that I’ll delve too closely into other solo systems, mainly because I’m deeply involved in projects. 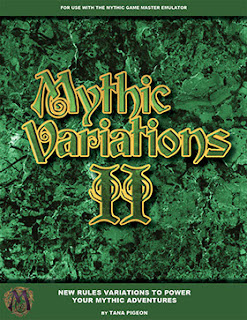 4- How was your first contact with RPG? And at what point did you think, " I need to create a system that allows me to play by myself?"

Tana: Like a lot of people, I discovered role playing games at an early age. Probably around when I was ten or so. I fell in love with them immediately. I was an introverted kid and spent a lot of time by myself. I loved making board games, just scribbling them out with pencil on paper. These were mostly solo games I’d play. The more I got into role playing games, the more frustrated I became that I couldn’t play them solo. I started seriously thinking about coming up with a solo engine in my early teens, maybe as early as 13. I was into computer programming, really basic stuff with a Commodore 64. I enjoyed making my own computer games, and I got more into concepts of artificial intelligence. This is what got me really thinking about mixing the concept of a computer AI with a pen and paper role playing game. The solo engines I developed went through many iterations. By the time I was about 30, I’d gone through maybe ten different versions of what eventually became Mythic.

5- Besides  playing RPG, do you have any other hobby in particular?

Tana: Sure. I love books and writing. I’ve written quite a few short stories, a couple of books, and I write a few poems every month. I’m a big geek and love science fiction and fantasy. I enjoy writing online with people too in sort of collaborative, improv story making. I enjoy graphic design and publishing, which is also my main source of income. I play some piano and I like music in general.

6. Of all the books you've ever written, which one did you most enjoy writing? And which was the most difficult?

That’s a tough one. Each book is a labor of love, so I enjoyed them all. The first Mythic book I probably enjoyed the most, but it was also the most difficult to make because I was figuring out how to make and publish a game while I was doing it. I honestly didn’t think anyone would be interested in Mythic, it just seemed too unusual, so I didn’t make it to sell, really. I made it because I loved Mythic and I’d been using it for years, with the rules just being loose sheets of paper I kept in a folder. I felt it deserved to be in an actual book on my shelf, so I decided to produce it. Of the later books, I very much enjoyed making Creature Crafter because I adore monsters. Who doesn’t like monsters! That book was just pure fun to make.

7- In addition to the games you have created, which RPGs do you like best? And what's your favorite kind of scenario/setting?

I have a couple of bookcases that are full of rpg books. Maybe 150 of them or so. I’m always buying more because I can’t resist. I rarely even play the games I buy, I just love reading them. However, if I were to choose the games I like the best, my top pick would have to be Call of Cthulhu. It’s just such an awesome genre, and Lovecraft’s mythos is so rich with unique atmosphere. I really can’t get enough of that. I’m a big D&D fan as well. I think the fifth edition is probably the best version of it ever. I tend to like darker settings with magic, and I like somewhat grittier and realistic scenarios because I feel like you can get some really poignant drama from that. Another favorite of mine is the old TSR Marvel Adventures game. I love superhero RPGs in general. Currently, I’m playing Rogue Trader. I very much like the whole Warhammer universe, it’s just so gorgeous and strange. I’m also a fan of Palladium games. They're old school RPGs that are still thriving to this day largely unchanged. What their games lack in modern design they more than make up for in pure fun.

8- Here in Brazil the solo RPG is only begining, in a more systematic way. The RPG generally moves a small number of people  here(but we  have great games, very well written). How do you see the RPG solo scene in your country, Tana?

Tana: Isolating my country in terms of solo play is hard for me. I’ve been so embroiled in the online environment for so many years now, I tend to think of role players as a global community. My sense is, though, that solo play is fairly uncommon in the United States, but for those who engage in it they are passionate about it. It’s interesting to me, because role players tend to deeply love role playing games. So here you have a community that not only loves RPGs, but they love solo play, too. It’s a niche within a niche. My hope is that solo play will continue to expand into wider audiences within the RPG community, and I think that’s happening.

9- Mythic and its supplements have a series of very special mechanics - Fate Chart, Chaos Factor, Favor Points, complex question, and more - what mechanics did you create that you are most proud to have done?

Tana: The Fate Chart, for sure. That’s the heart of Mythic. Everything else orbits around it in support. I’m proud of the fact that such a simple mechanic like the Fate Chart can take on so much life once you start using it. Many people seem to quickly get the sense that Mythic is alive and thinking while they use it. It’s a combination of the adventure itself taking on a life of its own, and the imagination of the player naturally giving more and more meaning to everything that happens. This is all strung around the Fate Chart, which is like the scaffolding that gives it all shape and form.

Tana: The biggest reward for me is in hearing from people who use Mythic and love it. I get emails from people telling me things like, they love RPGs but could never play them before but now they can. Or, they say that Mythic has breathed new life into their games, or has somehow touched their lives in a positive way. Hearing such energizing things from people is never something I expected when I got into this, and it’s easily the best part of publishing Mythic for me. The biggest challenge is how much work this is. I love the games I make, and I take them seriously, so it takes me a long time to produce a book. I’m coming up with the ideas, writing, commissioning artwork, typesetting the books, playtesting, maintaining the website, answering fan email, checking in on online groups, and taking care of the business side of things. It’s all just me doing it from top to bottom. I love it all, but it’s sometimes frustrating to me that I can’t produce more, faster

That's it, Tana. Once again, thank you very much! When I started to spread the RPG solo here in Brazil it never crossed my mind the possibility of interviewing someone so important to the history of the games that have this proposal.
A big hug, see you later

Thank you, Tarcisio, for the opportunity to answer your questions :) I think it’s awesome that you’re spreading solo play in Brazil, you’re going to help introduce a lot of people to our amazing world!

If you have any questions about any of my answers above, or would like anything clarified, please let me know. 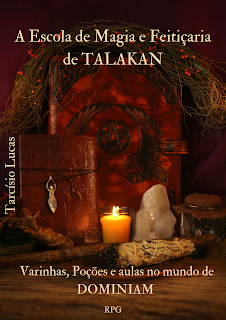